Possibly the most loved and worshipped camera on the internet. If you read a review that mentions in appreciative tones “rangefinder-like” just ignore everything else the author writes. The X100 is not rangefinder like to anyone who has actually used a rangefinder. It’s a somewhat compromised camera with a shape that makes some buyers feel that they are having a more authentic photography experience.

A better experience than if the camera was more appropriately designed. They are wrong. They are most likely suffering from the impression that their camera “says something” about them. Their uniqueness and willful abandon of the dreary, the commonplace, and well, commonness. To such people, being uncommon, even if it means being compromised, is a desirable attribute. Such authors may have “accessorised” their X100 with a red button and expensive hand-made case, perhaps an artisanal strap. This is to distance them from other X100 users, as due to all the rave reviews, the flawed camera actually became quite common. Which was a problem. 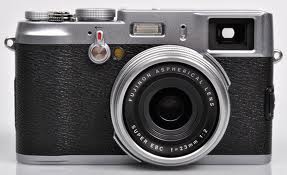 When it was introduced, and prior to its successor, the X100 was a unique camera. It was uncommon for a while. In good light, it focussed accurately and quite quickly, especially if you stopped it down a bit. Which you will, due to the limitation on fast shutter speeds at wide aperture.

But stopped down and in good light … ?  Many cheaper, smaller cameras perform well too. It was unique but … flawed.

I owned one, and what people wrote about the JPEG image quality was all true. Though to add some reality. Once you have the X100 plus its tedious lens hood on, it is not pocketable. Why does this matter ? My X100 without lens hood would fit in an ( excellent, by the way ) Snapr case. The very same case fitted my not exactly compact Pentax DSLR ( K7 ) with pancake 40mm lens. Which is, I have to say, a far better, easier to use, more flexible, tougher photographic tool.

The X100s appears to have addressed some of the handling issues I had with the X100. Namely :

– The autofocus was poor, slow, and needing a menu-change or mode to manual and button press to close focus ( why ?! )
– The manual focus was unusable except perhaps for static or infinity-focus shots
– The focus mode switch ( which you’ll be using often, as above ) was almost impossible to tell when it was in the right setting by feel, even by looking at it it’s sometimes not clear
– The exposure compensation dial would move while handling the camera ( taking out of coat pocket or case, for example )
– The camera would lock up from time time, needing the battery removed to reset ( yes, I had the latest firmware )
– The leaf shutter wouldn’t cover a wide open aperture faster than 1/500 ( it will just over expose badly, if you try )
– The ND filter ( built-in, and you’ll need it, as above due to the limitations of the leaf shutter ) indication was tiny. Often easy to leave it switched in by mistake, and vice versa
– While being “well built”, it always felt a little fragile, especially the switchable viewfinder. I could not just throw it in a bag like I can with, say, my LX5 or K7, with any confidence.

The plus points are well known. Excellent JPEGs. Truly, excellent. Top quality lens. That leaf shutter is just about silent, a real plus over an SLR. Also it permits the fill-in flash at higher shutter speeds, again very useful. Unfortunately it has serious downsides as mentioned.

The result, in my case from taking many thousands of pictures, was a really low keeper rate. The good ones were very good. But far too many out of focus shots. Too many missed shots ( while resetting the auto-focus mode, or switching out the ND filter, or putting the exposure comp back … ). It really soured it for me after a while.

Once you’ve hacked a lenscap, bought the hood, the wide-angle adapter, a decent case, the big red shutter release and the extra grip, it’s a very expensive camera too. There are plenty of glowing testimonials on the web from happy users for those that need the reassurance of others’ opinions. Sometimes useful to know a flip side.

As for it being a digital equivalent of a rangefinder. How I wish ! It looks like one. Fuji know their market. I like rangefinders. I shot the birth of my first child using a Minolta rangefinder. I still own a couple. The thing about rangefinders is you have that silent shutter, (usually) a superb bright lens, simple exposure control, and A RANGEFINDER for focussing !

A rangefinder is a superb tool because all these elements are present together.

The X100, and to be fair, with virtually all non-rangefinder or non-TTL viewfinder cameras, you don’t have direct control over the focus point. You never really know what it has focussed on. You can’t prefocus the lens manually. You are in the lap of the electronics. The optical viewfinder on the X100 is super, but you can’t tell what it has focussed on, just the focussing distance. You cannot easily control this either – the fly-by-wire manual focus, with its little “steps”, is horrible.

The rear screen is one of the best there is, but is not good enough to determine focus. Nothing like match-the-rectangle on a rangefinder, or align-the-split-prism or ground-glass on a manual TTL viewfinder camera.

So you really have to rely on its autofocus. Which is slow. And often focusses on something other than your intended target.

That’s what I meant by a low ratio of “keepers”. Not a low ratio of “photos I’m proud of or would like to print”. I mean’t a low ratio of photos that weren’t simply ruined, for technical reasons. Out of focus. Exposure wrong ( due to the exp. comp. dial moving ). Shot taken too late ( as I was doing the tedious pre-flight checks to ensure none of the controls had moved ). It really was frustrating.

When you have the time to take a shot, it’s great.

I take a lot of pics of my kids. It was hopeless for that. There is no point having “great skin tones” ( which it does ) if the skin you are photographing has a habit of moving. You may, if you do your pre-flight checks, get a technically usable photo. But it will be 10-20 seconds after the moment. Fine if the subject is a grape, and the skin a grapeskin. Otherwise, buyer beware ! Now the X100s is out, fixing many of these foibles, it’s really hard for me to see the X100 recommended. There are so many on the used market here ( from £350~ ) it seems many current owners are taking the opportunity to move on, too.

It’s not a fast camera to operate. It’s not pocketable. I used a Rollei 35 for years as my only camera and I too am still hunting for something digital that is as small with a good lens and ease of use. My keeper rate with the Rollei must have been close to 100%. I’m perfectly fine with all-manual everything.

The internet buzz is/was huge over this camera. It has many plus points, but don’t be blinded. There are quite serious issues too, enough for Fuji to attempt to address some of them with the X100s. The focussing speed, out-of-control exposure compensation, focussing switch ambiguity and the close-focus button dance were real problems. Ones that the X100s attempts to remedy.

The X100S does seem like a better camera. You still have the size issue though. The X100 and the X100S are not pocketable. As you can obtain a much more capable camera ( my Nikon D50, 8 years old, would qualify, let alone the aforementioned Pentax K7 ) why bother with the X100(S) ?

Because you want to be seen as unique ? There are easier ways.