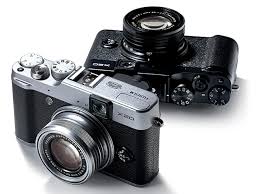 Had some hands-on time with the X100S and X20 today. Not in a position to review them, but thought I’d throw out my first impressions anyway. It is fundamentally the same camera. If you are used to the handling and have workarounds for the focussing lethargy ( f8 … ) by now, it’s not going to feel like a huge leap I suspect. In fact, it wont feel like a tiny step. I will feel exactly the same. There wasn’t an X100 next to it to compare, but from memory of my old one, the buttons and dials all feel pretty much the same. Including the AF switch, which is still a bit fiddly and ambiguous by sight and feel, but at least the setting you’ll use most is now not the hardest to select. The exposure comp dial too seems to be just as easy to knock. I noticed no greater turning resistance.

The upside of this physical non-evolution is that at least accessories like cases are going to fit perfectly. There are no new holes, appendages, or revised countours. The EVF, which has been upgraded, looked fine, but then so did the old one. It still suffers from bloom and lag, like every other EVF. I tried focussing and … it’s fast ! Hard to be definitive here, as I was indoors and there wasn’t anything challenging to focus on. As we know, the ISO standard for focussing speed is a kid on a swing, and I just couldn’t find one in the shop. If you fancy using the lens wide open, and often take pictures of living things, this might be reason enough to plump for the X100S. Next up, the X20. No big physical changes here, either. You get some better movie capability, apparently, including the option of an external mic. Focussing speed is again supposedly improved, and indeed exhibited no problem on the indoor static objects I tried. The optical viewfinder now has basic ( shutter/aperture ) data overlaid. Nothing like the amazing head-up-display of the X100(S) but quite useful. It’s a sort of semi-translucent digital projection at the bottom of the viewfinder. Prioritises the view over data legibility : it was easy to wash it out when viewing bright subjects. But in my view ( >rimshot< ) this is preferable to having some ugly solid font distracting you all the time. Nicely done, in other words.

Now here’s the interesting part. The X20 felt like a TOP CLASS jewel of an instrument. Really really solid. The X100 ( either variant ) is well built but, how can I put it, in comparison to the X20 it seems a little hollow, more fragile. It may well be my imagination, but I could see myself feeling confident tossing the X20 into a bag, but not the X100. It’s smaller too, of course, and this probably helps it feel reassuringly “dense”. Very covetable. Not cheap, either of them.