It was my first car, and I used all the money I had in the world, £3000. I wasn’t very good at determining a mechanically good car from a bad one, but when I saw the red sports car, I had to have it.

This is me then, about to take my sister out for a spin: 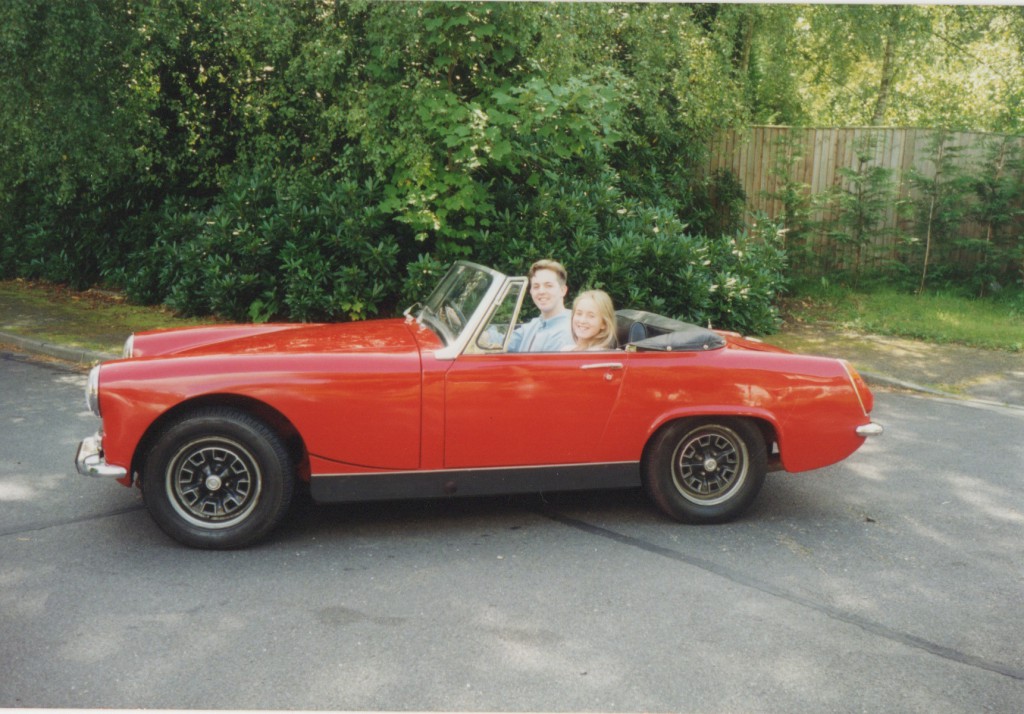 As I say, I was 21. I may have been influenced by certain adverts from my youth … I remember this one: 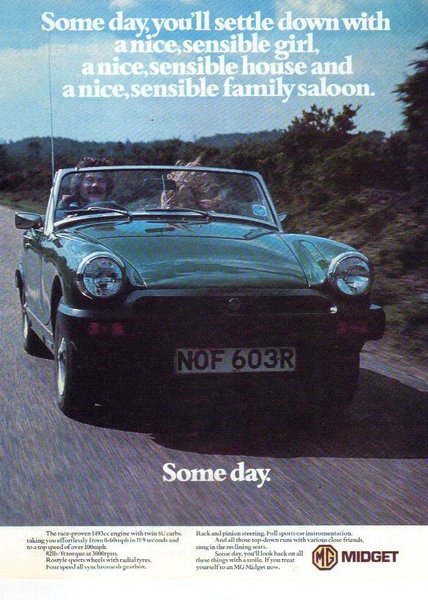 But perhaps most of all this one, with it’s very subtle imagery… 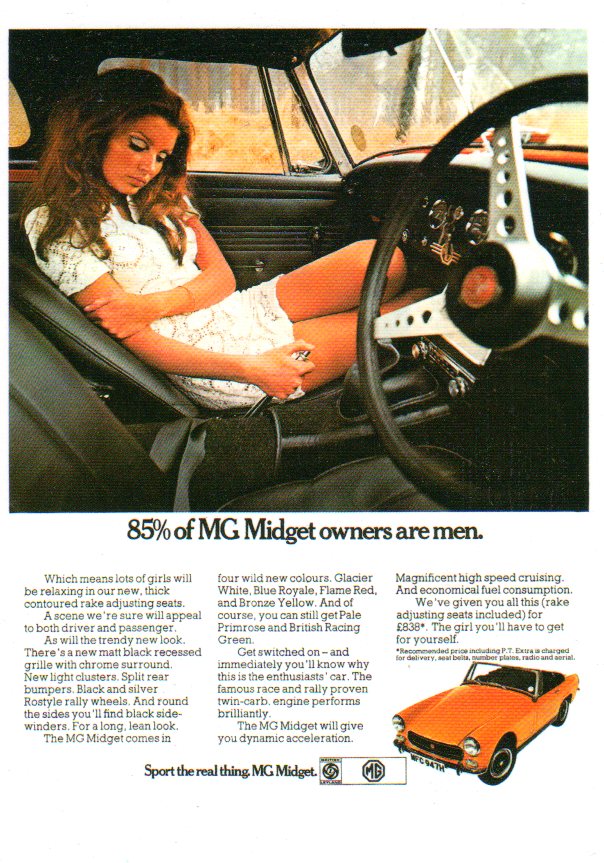 The good points of the MG

1. Stationary, the car looked great. I had the hardtop, soft-top, and the full length cockpit tonneau cover with a zip in the middle to make it an open-top but enclosed single seater. I like to think, even now, that it was a better looking, more characterful car than £3000 of Rover Metro or similar.

3. It gets the “I am an individual, of refined taste and unusual means, as demonstrated by my choice of automobile…” out of your system early.

Assuming you survive ( see later ) this will save you an huge amount of money in the future.

1. It will cost you an huge amount of money in the present.

Mine was the 1275cc twin carb variant. It had just enjoyed a respray when I bought it. This appeared later to wipe off with a cloth. Apart from that thin layer of paint, I think everything else was replaced in the next two years.

With a British-built budget classic of that age the purchase price should only ever be viewed as the first installment of a particularly lengthy series of essential subsequent financial commitments. The motoring equivalent of signing up to Readers’ Digest.

2. Parts are made to the same specifications as the 70s originals. That is, terrible.

The following, from memory, are what I had replaced in the first two years:

This was on a car that cost £3000 to begin with, supposedly not a complete wreck.

Depending on where I was when these bits failed, so varied how costly the replacement was and how amusing the overall experience.

Driving down the M40, the exhaust fell off. Dragging it behind me in a rooster-tail of sparks, I passed Banbury in a literal blaze of abandon. I had no idea. People pointed and waved. How I laughed, how I bathed in the glory! Me. Young. Free. In an open topped classic car. Wind in the hair. Chassis on fire. 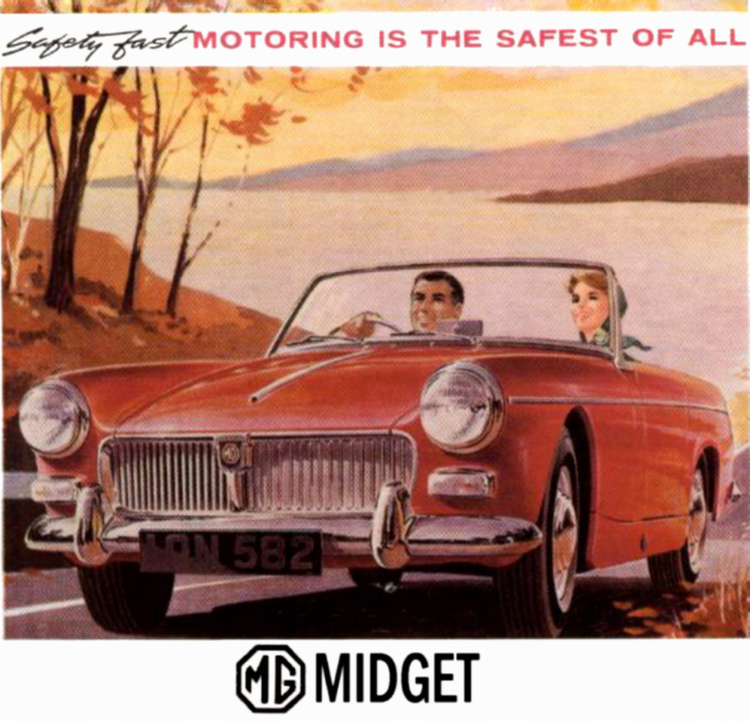 The recovery driver charged £150 for the rescue.

My petrol tank had a rust hole in the top which, when turning left, would facilitate the lubrication of the rear offside tyre with petrol. This pepped up the handling. It used more oil than gas. I travelled with a 4 litre can of Castrol in the boot, and it wouldn’t last a week. The rear drums were rusted beyond adjustment. The front brake fluid would boil.

This all made for an interesting braking technique, involving pulling the handbrake half on, to bring the drums into play, then depressing the brake pedal once and then rapidly pressing it again while wrestling the wheel to maintain a straight course as it gently decelerated in its own time.

The steering wheel itself, I might add, was attached to the front steering rack by a long metal column in the usual manner. In an easy oversight to make, while the steering wheel was firmly attached to the column at its end, the other end of the column was merely a loose push-fit into the steering rack. Pulling gently on the wheel, while attempting a hill start for example, would allow the wheel – complete with attached 5-foot column – to slide smoothly backwards into one’s lap.

As the traffic lights changed, the challenge was to attempt a kind of frenzied Soyuz docking protocol, blindly attempting to locate the tiny and distant steering-rack receptacle for the steering column with minuscule adjustments to the attitude of the wheel, while proceeding forth but before the first corner – and the certainty of a solemn write-up in the Warwick Gazette.

There was no synchromesh on first or second. The full procedure involving the petrol-leak assisted untraction control, double-de-braking and steering column game for say, a roundabout, required a certain amount of in-car callesthenics.

I drove to France with my brother, visited Disneyland, and then took a lap of the Arc de Triomphe with the top down. The shock absorbers had fallen off somewhere near Calais, so the ride was even more vigourously bouncy than usual.

Approaching the famous Arc, I looked like a man who had sat on a wasp, or was practicing some form of experimental dance exploring the tragedy of the human condition. I was wearing my symbol of culture, a Goofy cap. Naturally, the French loved it, vigorously tooting their horns with Gallic approval. I was busting some serious moves.

I just thought of another Good Point:

I was never asked to be the designated driver.

I eventually moved and gave the car to my brother. He wisely sold it, and bought a VW Camper to travel around the world. He got to Basingstoke before it collapsed, permanently. He bought a round the world air-ticket instead. Much more reliable. Met a girl in Australia, married her, lives there still. Happy ending. All the above is true.

Buy a daft car when you are young.

Just make sure it’s an MX5.

0 Replies to “MG Midget or Young Men and Cars”